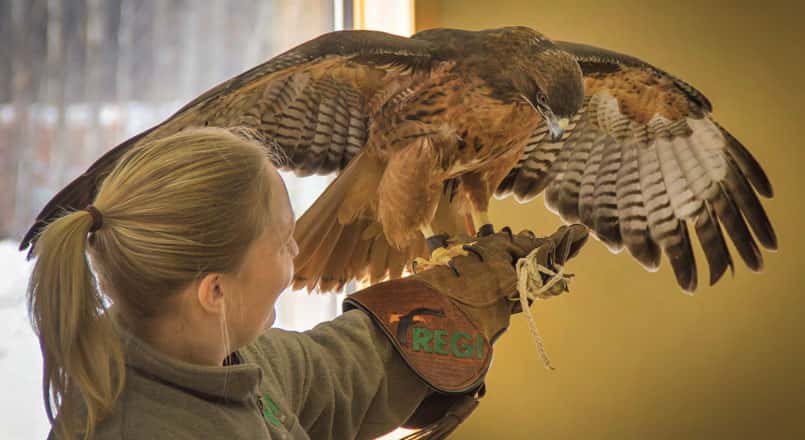 On Feb. 4, 2015, the Raptor Education Group Inc. (REGI) came to the FCP Cultural Center, Library & Museum to discuss raptors: birds that hunt and eat other animals.

REGI is based out of Antigo, Wis., and is a non-profit organization that assists in the rescue, care and rehabilitation of any wildlife with feathers. They take in injured or orphaned birds in need of extra help to get healthy or actually just to survive.

Marge and Don Gibson are the founders of this fine rehabilitation center and have come very far from where they once started bird rehabilitation in their own home. Marge has worked with these magnificent birds for over 30 years and still is involved with every bird that comes into the facility.

REGI offers many educational opportunities to the public such as presentations at schools and other community sites, special programs in different parts of the state, or tours (when available) through their facilities. They actually have one of the world’s largest flight-training facilities for exercising injured birds, mostly eagles, as they recover from injuries or illness and learn to fly again.

The two educational staff who came this day were Abbey, director of education and avian trainer, and Joe, educational assistant. They both did a fantastic job controlling the raptors as well as the children from Gte Ga Nes Preschool. The children were extremely intrigued by each raptor shown to them – so much so, that they wanted to pet each one. However, to keep the birds calm and safe and the children safe, that was not allowed. The children all did very well maintaining their excitement and learned a great deal from each of the educators.

The four raptors that REGI brought along with them were a merlin, an American kestrel, and two red-tailed hawks—with slight differences between them.

The merlin is classified as a falcon under the raptor group. This is a super-fast bird. To make sure she wouldn’t fly away, Abbey had the bird attached to her glove with a leg cord. Her name was Scarlet, and the educator showed the children all of her characteristics. Abbey explained that her nostrils had a spiral shape to them to help her breathe while flying so fast. She also explained how the merlin loves to catch its prey while flying, so what they usually eat is other birds that they catch in mid-flight.

The next falcon that Joe got out of the box was an American kestrel, which is the smallest falcon in the United States. Many similarities were pointed out between this bird and the merlin, in wings, legs and nostrils. However, unlike the merlin, this bird actually eats insects.

The kestrel lives in Wisconsin year-round. And to survive in Wisconsin’s cold winters, it switches its diet and eats smaller birds rather than insects as there are obviously not many bugs around in the wintertime. Joe remarked on this unique feature saying, “You usually don’t see many birds who will switch their diets from season to season.”

One other thing that is unique about the kestrel is they have the ability to hover, which means they can stay in one spot within the air. They also have the ability to move their body around their head while the head stays still—a useful talent for hunting. Joe demonstrated this very unique ability with the bird they brought, and it really was quite interesting to witness.

Next, they brought out two different types of raptors which were considerably larger than the kestrel and the merlin. These were two different-looking hawks, but it was interesting that both were the same species.

Joe brought out a young red-tailed hawk which actually did not have a red tail. This is because it was only a year old. Joe explained to everyone that the tail on the hawk does not turn red until they are two years of age. Joe went on to say, “There are three main characteristics of a raptor that the red-tailed hawk shows. The first is the beak: this is a very sharp beak that can rip and tear their prey to make it easier to eat. The second thing is the feet: they have very sharp talons to help catch their prey. And the third thing is their eye sight: if you had vision like a raptor, you would be able to read a newspaper over a football field away. These are the three main things that make raptors, raptors.”

Abbey then took out the last bird of the day which was also a red-tailed hawk named Juliet. She advised us that she was the very first bird to come to REGI, and that she was 26 years old.

It was pointed out that with the raptors, the females are usually bigger because of their role in laying and incubating the eggs.

Abbey then went on to tell the children different ways they could help keep wildlife safe within their own backyards. She explained it was important to clean up garbage that might be lying around. She emphasized the need to pick up fish line that might be found at the lake with instructions that they should take it home and cut it up as it could become tangled around the bird’s feet or wings. She actually brought some line that had been taken off a bald eagle that had come into REGI. In addition, she explained that the rings that hold cans of soda should be cut so they couldn’t become stuck on a bird; she also suggested putting up window clings to keep birds from hitting windows. She also further stated the importance of using mousetraps rather than mouse poison so that the birds that might eat a dead mouse don’t become poisoned as a result.

At the end of the presentation, Abbey and Joe took questions from the children and adults who attended. The event went well with all of the children really paying attention to what the educators were saying about the birds. REGI did a fantastic job explaining each raptor and the ways we can all help protect these beautiful creatures in the wild.