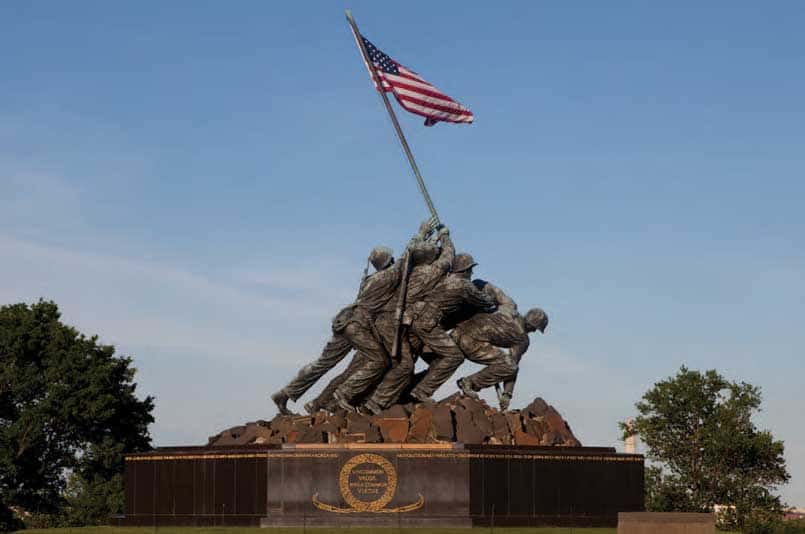 As most Americans know, the United States entered World War II after the attack on Pearl Harbor on Dec. 7, 1941. The war had actually started in Europe in September of 1939, but it took this event to draw our country into the battle.

Following this attack on a naval base in Hawaii, there was a call to arms across the country. But, no other minority assembled as quickly to the defense of their country as did the Native Americans. When compared to all other groups, Native Americans were the largest contributors per capita to the armed forces with over 10 percent of the population and a third of the able bodied men between ages 18 and 50 serving during this war. Some tribes had as much as 70 percent participation in the war effort.

As listed on Pearl Harbor Day, there were 5,000 Natives in the military. By the end of this historic war, over 24,000 reservation Natives and another 20,000 off-reservation Natives had served. This was from a total population of about 350,000 as of 1940. In addition, another 40,000 left the reservations to work in the defense industry. It is speculated that by 1945, over 150,000 Native Americans had directly taken part in the war effort by their involvement in the industrial, agricultural, and military aspects. The response of the Native population in this country to the war effort was such that when the Pearl Harbor attack happened, it seemed that it awakened the ancestral “warrior” in many Native Americans. The definition of “warrior” is as follows: 1. a person engaged or experienced in warfare; soldier 2. A person who shows or has shown great vigor, courage, or aggressiveness, as in politics or athletics. (source: dictionary. com) This definition certainly seemed to apply!

It was noted that the Natives were willing to overlook years of disappointments and resentments to defend their own land as more than other ethnicities in the country, they understood the importance of doing so. Their “warrior” history evoked great respect in their military colleagues, and they were integrated into all branches of the service. The Marines in particular had great respect for the “warrior” abilities of the Natives though they distinguished themselves in all branches of the service.

Native Americans served on all fronts during this time and many distinguished medals and honors were awarded them including: Purple Hearts, Distinguished Flying Crosses, Bronze Stars, Silver Stars, Air Medals, Distinguished Service Crosses, and three Congressional Medals of Honor—the highest military award granted in the country. Even though Congress granted Native Americans citizenship a bit over a decade before the war started, in 1924, there were more Natives who voluntarily enlisted for battle than were drafted. As has been repeatedly noted throughout the history of Natives in the military, this again shows that these men and women were ready to step up and battle for their land and country. One source commented that had the general populace volunteered with the same percentage rate as the Natives, the draft wouldn’t have been necessary.

In addition to the large number of men who took part in this war, there were many Native women who served in the armed forces as members of the WAVES (Women Accepted for Volunteer Emergency Service), WACS (Women Army Corps), and Army Nurse Corps. In addition, the women left at home took over many of the roles that the men previously handled becoming farmers, mechanics, lumberjacks, delivery personnel, and whatever other jobs needed to be handled on the home front.

One famous lady, Julia (Nashanany) Reeves, 1st Lieutenant, U.S. Army (42-45/51-52), was a member of the Potawatomi tribe in Crandon, Wis., and a member of the Army Nurse Corps having joined in 1942. She was assigned to one of the first medical units shipped to the Pacific. She ended up transferring to the 231st Station Hospital in Norwich, England, where she was located during the invasion of Normandy. She remained there until the “Victory Over Japan Day”. She then returned to the United States though she subsequently served in a hospital during the Korean War.

Very little is known about these brave women who participated during this time of war but research continues to provide more and more information on their personal histories.

It is interesting to note that in addition to a strong commitment to their homeland, another strong incentive for Native American involvement in this war was tied to the past. In 1917, the Iroquois declared war on Germany; they never made peace with the country so they actually considered them to still be the enemy. Members of some tribes such as the Navajo were so ready to go to war, they stood in horrible conditions of weather just to sign their draft cards. Some took great offense if they were found not to be fit for duty for medical reasons.

Native Americans had a great understanding of defending one’s land and, as with the other wars discussed in this series, they stepped up to the plate in remarkable numbers to serve their country. Their superiors often commented on the fact that Natives excelled in basic training particularly in marksmanship, bayonet battling, and general endurance in that they were able to endure thirst and food deprivation better than the average recruit. They were superior soldiers. They are one minority that truly “gets” the fundamental concepts of fighting for land, life, property, liberty, and the pursuit of happiness. No Native could better understand this than a man by the name of Joe Medicine Crow.

Crow is a member of the Crow Nation and is also a historian and author; he is the first member of his tribe to go to college and graduate and has also obtained a master’s degree. He is the grandson of White Man Runs Him, a scout for George Armstrong Custer before the Battle of the Little Big Horn. His other Grandfather is a legendary Chief by the name of Medicine Crow.

Crow joined the Army and became a scout in the 103rd Infantry Division. According to his tribal tradition, to become Chief of the tribe one must follow through with these certain tasks: he had to touch a living enemy, take an enemy’s weapon, steal an enemy’s horse, and lead a victorious war party. Out of all those steps, Crow completed every one and this gave him the right to become War Chief as his grandfather was before him. Crow received many different honors such as the Bronze Star, Legion d’honneur; and he was awarded the Presidential Medal of Freedom by President Obama in 2009. Crow is still alive today at the age of 101.

Another well-recognized name of a Native American in WWII is a man by the name of Ira Hayes, a Pima Indian. Hayes entered the war at the age of 19 and was enlisted with the Marine Corp Reserves. After training, Hayes volunteered to become a paratrooper. He was given the codename “Chief Falling Cloud” and graduated on Nov. 30, 1942, from the Parachute Training School. After involvement in several campaigns, Hayes landed with his unit on a beach near Mount Suribachi. This location became well-known as the site where the infamous photograph of the raising of the American flag on Iwo Jima was taken—one of the most famous icons of WWII. Hayes became a national hero as a result of being one of the soldiers included in this photograph which was taken by photographer Joe Rosenthal. After this monumental photo was released to the public, Hayes was assigned to make public appearances with the association in charge of selling war bonds. This all became a very public affair which drew a great deal of attention, and Hayes was not at all comfortable with this being by nature a shy and conservative man. Not being one for public appearances and to dull the anxiety he felt from this role, Hayes turned to alcohol. Sadly, he spent the remainder of his life battling that demon with it being the cause of his eventual demise on Jan. 23, 1955. He was buried in Arlington National Cemetery. At his funeral, fellow flag raiser Rene Gagnon, said on Hayes’ behalf, “Let’s say he had a little dream in his heart that someday the Indian would be like the white man—be able to walk all over the United States.” It is significant that WWII marked a change in the Native American integration in this country. Many who left the reservation during the war to work in the “white” world found they were accepted into and became a part of the national society. Some stayed in that world while others did not like it and returned to the reservations. Regardless, things were never the same.

Another contribution of Native Americans to the WWII effort has only in recent years received a great deal of attention, and this was the role of the Navajo Code Talkers. These men are regarded as highly intelligent and incredibly brave. Their contribution to the war effort was huge. During WWI, the Choctaw served in a similar capacity, and in fear of such a thing in the future, the Germans actually infiltrated some of the tribes in the 1930s to try to learn the language. Not only did their attempts fail, it is felt that this may have actually encouraged the Natives to enlist in a battle against the Germans. The Navajos had a language that would go down in history as being “unbreakable” by the Japanese, in part because of its syntax and tonal variations. But also because it was an oral language with no written form.

The original code talkers were made up of 29 men from the Navajo Nation, though they numbered over 400 by the war’s end. It was because of one of these men that my interest in Natives in the military was triggered. The result is this series of articles, “Native Americans in the Military.” Chester Nez, the last of the original Navajo Code Talkers, passed away this past summer on June 14, 2014, of kidney failure. Nez was raised by his father because his mother passed away when he was only three-years-old. His father then heard of the free schools that took in Native children to teach and educate them. As we know now from history, these schools punished and disciplined these children for talking in their native tongue. Nez was sent to a school in Arizona that forbade him to use his own language for speaking. What a paradox that this very language—once highly forbidden— became a language that played a huge role in winning the war and saving the lives of thousands of American soldiers during this worldwide battle.

WWII marked a major break from the past for Native Americans. It was noted by one source to be an event that “caused the greatest disruption of Indian life since the beginning of the reservation era.” It marked the first time many Native Americans had left their reservations. It affected their habits, their views, and marked a change in the economic well-being of individuals.

After the war, many remained in the cities, but a large number returned to the reservations as the life in the urban world did not appeal to them. Despite this, they had found they could actually live in both worlds, and the lives of Native Americans were forever changed after this war. As with other wars, despite previous years of oppression, the Native Americans distinguished themselves in WWII, both by their willingness to join the war effort and by their actions in all branches of the military. The rest is history.