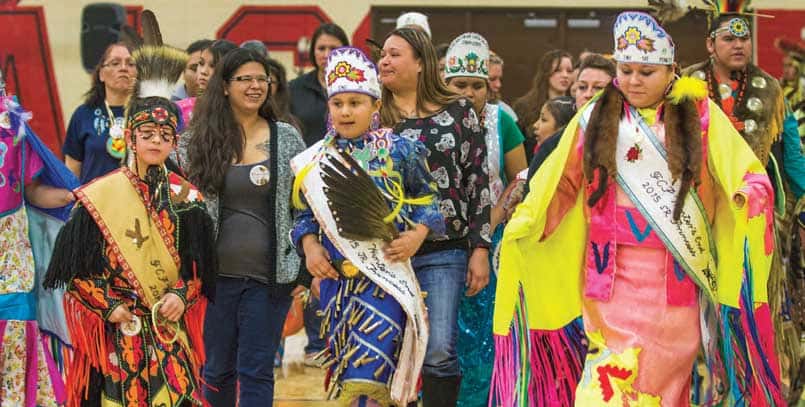 The 20th Annual FCP Winter’s End Pow-Wow was hosted on March 21-22, 2015, at the Crandon High School gymnasium. There was excellent attendance, and the younger generation had an exceptional turnout. There were many smiling faces and a lot of laughter. After a long winter, this was really nice to see.

Specials included a Hand Drum Contest with the winner being Tyson Webster. The main special dance of the night was the “Switch Dance”. This is a fun event where the female and male dancers switch regalia and dance styles. It was very entertaining from what PTT hears! There was also a Brave and Princess give-away from the previous royalty.

The announcement of royalty is what many look forward to. After Grand Entry the new Winter’s End royalty was announced. This year’s Senior Princess went to Jenna Schingeck Jacobson. When asked by PTT why she ran for princess, she shared, “Because I wanted to prove that I could do it, and I am very happy with the outcome.” Brave went to Galen Daniels who was also happy with his achievement as could be seen by the big smile on his face. Junior Princess went to Allisia Cisneros-Tuckwab who said, “After three years of competing I am VERY happy with this!” Congratulations to all new royalty. PTT looks forward to seeing you all out on the pow-wow trail this year!

Many people of all ages enjoyed themselves and had a great time this year at the Winter’s End Pow-Wow. There were a variety of talented dancers to watch, great drumming/singing to enjoy, and delicious traditional food to be eaten. It was obvious to all present that it was a wonderful social event for the families and many friends in attendance. There was a lot of visiting and smiles all around. Many thanks to FCP Rec Center staff, Crandon School District, the pow-wow committee and to all who attended!