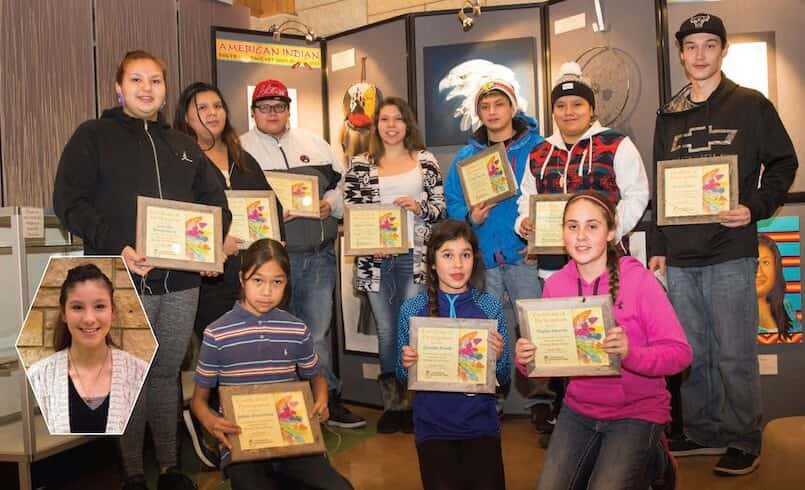 Seven years ago, Potawatomi Traveling Times (PTT) came up with the idea of celebrating American Indian Heritage Month by asking area tribal youth K-12 to express what their heritage meant to them by way of creating art. Over those seven years, 154 projects have been submitted ranging from poems and short stories to bead work and baskets to pottery and paintings and everything in between.

In the beginning, submitted artwork was part of a display that traveled between what was then Indian Springs Lodge, FCP Museum, FCP Executive Building, and FCP Health & Wellness Center. It soon became apparent that a traveling display would require a lot of time and effort due to the complexity and size of some of the projects. After several years at the old tribal hall, it was decided that each year the display would be set up at the Executive Building and would remain there beginning the first week of December through the first week of January. And in an effort to fully honor and recognize the talent and efforts of participating youth, a reception at the old tribal hall was added four years ago.

For the first time this year, the reception was held at the FCP Executive Building auditorium on Wednesday, Jan. 6, 2016. Always looking for a way to “up our game”, PTT added a few surprises: Also on display were 12 framed collages showcasing the artwork of the first six years; the certificates handed out to youth came in reclaimed barn wood frames; each youth was presented with a beaded necklace, and a youth drum, the Young Warriors assisted by Fire Nation, was on-hand to help add yet another dimension to the event.

It should be noted that this event is the culmination of months of planning and organization by PTT staff, teachers, and school administration, not to mention the work of the students. Many thanks to those who had a hand in spreading the word in the community, and to those who encourage budding artists every day.

PTT is pleased that students from four school districts were represented this year: Crandon, Elcho, Laona and Wabeno, with a total of 26 submitted projects. The mediums included metal, pencil, acrylic paints, bead work, and pottery. Below is a list of the participating artists along with a bit of information about them and their art:

Thank you to these young artists for their hard work and participation. PTT hopes that their vision, imagination and quest for positive self-expression will continue for a lifetime!

Many thanks to FCP tribal member, Sam Alloway, for offering the prayer.

PTT considers this reception our most successful yet with an attendance of around 75 that included students, parents, family members, school administrators and teachers. A debriefing by staff the next morning revealed areas where we can improve, and we’re already looking forward to what this year will bring!