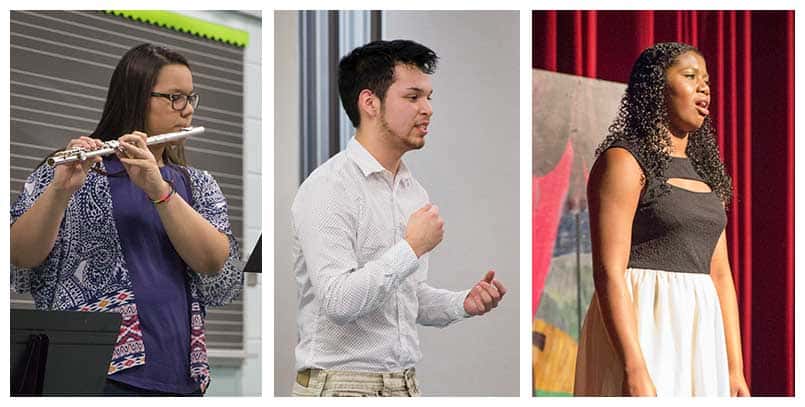 The 3rd Annual Night of the Arts was held at the Crandon School on Feb. 22, 2016, and hosted by the district students and their instructors. This night brings together many of the talents and skills that the students embrace and gives them an opportunity to share their performances and accomplishments with their families and the community. The presentations on display included vocal and instrumental music, visual arts, forensic presentations, and culinary arts.The evening’s activities started promptly at 6 p.m. with a non-stop bustle of activities until 7:30 p.m. With many students performing in multiple events, parents and families and other observers had to rush from room-to-room to make sure they caught each of the performances.

The visual arts portion of the night was set up in the cafeteria with students actually demonstrating their talents either by using the pottery wheel, beading on a loom, and working on self-portraits. Many of the spectators really took their time looking at each piece of work on display. FCP community students who participated in this portion of the event were: Aaleyah Alloway, Isaiah Alloway, Israel Alloway, Ryon Alloway, Santos Alloway, Janiece Brown, Gizhgo Daniels, Kaitlyn McGeshick, Breed Shepard Jr., Madison Soman, Victor Soman, Zakk Soman and Dawson VanZile.

The culinary arts portion was a very nice touch. Not only did the students come up with the foods that they would be preparing, they also were dressed in aprons and chef hats and walked around the entire evening serving their creations on platters for the spectators — an elegant touch that complimented the event. FCP community students who were a part of this were: Maskwankot Daniels, Ira Frank Jr., Patricia Powless and Elijah Meshigaud.

Instrumental music and vocal performances were another popular focus. Trying to make it to each performance on time was a bit of a challenge as each lasted about four minutes. Running from one hallway to another or to

The forensics presentations provided an opportunity for spectators to witness several remarkably talented youth. Some of the students came up with their own skits; some were powerful with deep meaning that were brilliantly conveyed by the words they wrote and then acted out for the audience. There’s a lot of memorization and excellent acting skills involved in these presentations. FCP community students Autry Johnson and Darlania Boyd both did a spectacular job in delivering their performances.

It was obvious the community was enjoying the evening and all were impressed by the presentations. Comments were overheard in the halls throughout the evening such as, “Wow! This is so much talent in one small community!” or “I can’t believe how much work and talent is put into this night. It’s amazing!”

Jodi Brownell, Spanish instructor, took the time to comment to PTT about the number of FCP community members participating in the event. She stated, “These students have so much talent in the arts and it is great to see this happening. Times are changing and what a great change it is!” She was amazed by all of the students who participated in this night, as were many others who were in attendance.

The night was a great success for both the students and school. Many of the attendees are already looking forward to next year’s performance. Be assured that it is an event you won’t want to miss.