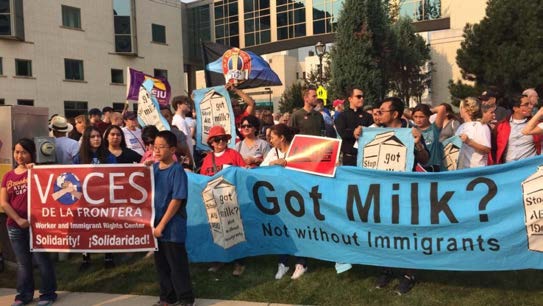 Though many times immigrants go unheard and their needs unfulfilled, Voces de La Frontera fights to give them a voice in the Milwaukee community. With the help of their many volunteers, Voces is able to run a number of programs to the benefit of immigrant families in need of assistance.

On Wednesdays from 6pm-8pm and Saturdays from 9am-1pm you can find them in the classroom working diligently to create an understanding of civic and educational rights in their citizenship classes. Since 2008, these classes have helped a number of immigrants receive citizenship, including students like Magdalena (top), who have continued to serve with Voces since their graduation.

The Citizenship program also emphasizes that students begin to learn the culture of the United States. Holding events such as their annual Thanksgiving feast, the immigrants are allowed their first taste at life as a citizen of the United States. Events such as this one serves as an opportunity for immigrants to get together and meet people who are in the same situations as they are, making the transition a much smoother one.

Though Voces does great work in the classroom, they are not afraid of the footwork that is necessary to bring immigration reform for the United States. Through many marches and protests, Voces seeks to raise awareness for many issues that go unheard, but affect so many in the immigrant community. Every September you can join them on the streets as they march on labor day to continue to fight for immigrant worker rights.

With passionate volunteers and hard-working students, Voces de La Frontera has been able to put together a number of very successful programs. With the help of the Forest County Potawatomi Foundation, they will continue their fight for immigration reform, and continue to change Milwaukee.